The Friends of the Gardens received the Local Achiever Award 'In recognition of outstanding community service towards the development, advancement and welfare of the citizens of Warrnambool'

The Friends of Warrnambool Botanic Gardens have for some years been heavily involved in the resurgence of our treasured gardens.

In 2018 they embarked on a new challenge – the creation of a unique play space in the gardens, a space that would engage young people and the young-at-heart.

The Friends’ proposal – the Nature-Based Play Space – was pitched to the community through the Victorian Government’s “Pick My Project” initiative.

The play space was a popular choice and attracted just under $200,000 in funding.

Then the hard work really began. The Friends engaged the highly regarded landscape architects Laidlaw and Laidlaw to create a play space design that used natural materials and features including fallen trees and local basalt.

There were also some heritage hurdles to clear and the Friends – aided by 150 letters of support from Warrnambool residents – were able to persuade Heritage Victoria that the Nature-Based Play Space was in keeping with the original garden design by the renowned William Guilfoyle.

The new play space, the product of more than 3,000 volunteer hours, was officially opened on October 28 last year, and immediately won approval from children and parents. 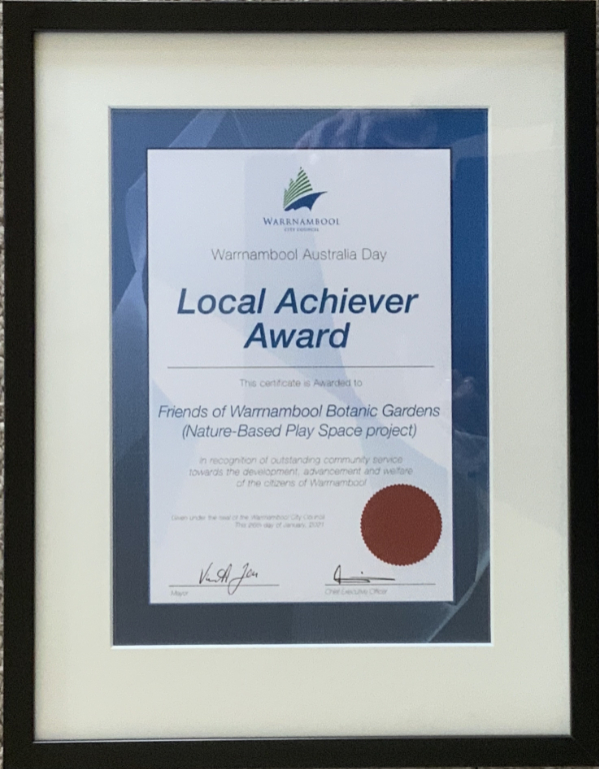 The Nature Based Play Space is open

Wednesday 28th October was a red letter day in the Gardens. A group of three and four year olds from Beamish Street Kindergarten put the Nature Play Space to the test and it passed with flying colours.

The fence is down now and already the play space is the centre of attraction. It would not have been possible without the support of all the Friends and the wider community. Take a bow!

There are so many people I want to thank. First of all the Committee. Secretary, Mandy King has over the last two years put in hundreds of hours keeping  records, checking and vetting accounts for treasurer Fiona Rule to verify and process.

Vice President Janet Macdonald has  prompted and promoted the project all along the way, as have the rest of the committee. Neil McLeod took on the role of Project Manager and volunteered hundreds of hours to the task. Donna Lumb produced a children's book "For Love Of Nature" which illustrates the development of the play space. They are all members of 'The Friends'

Neil worked with John Sheely and Paula Gardner as the project team - a trio that knows no equal. Thank you for your dedication, your commitment and your skill.

There are many others who supported the project and we look forward to recognising them when we can have an official opening, without the restriction imposed by covid.

If you would like a copy of the children's book for a tiny tot you know, or just a record of the project, they are available for $20.00  and will support the on going work of the Friends. You can place an order with me (0400138836) or email the Friends.

It has been a privilege to work with you all. 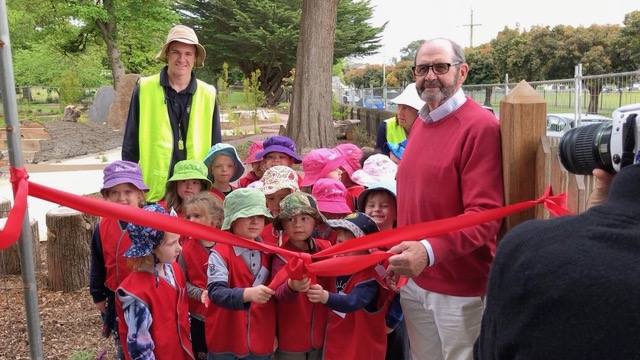 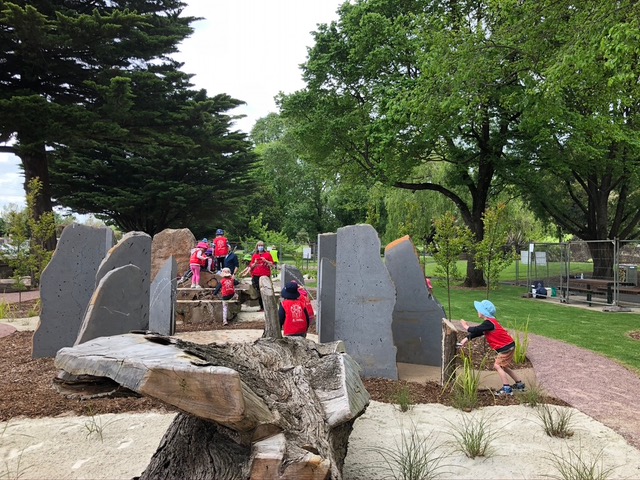 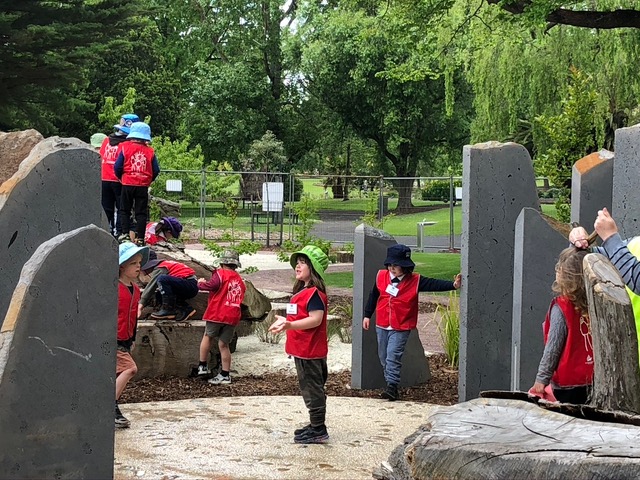 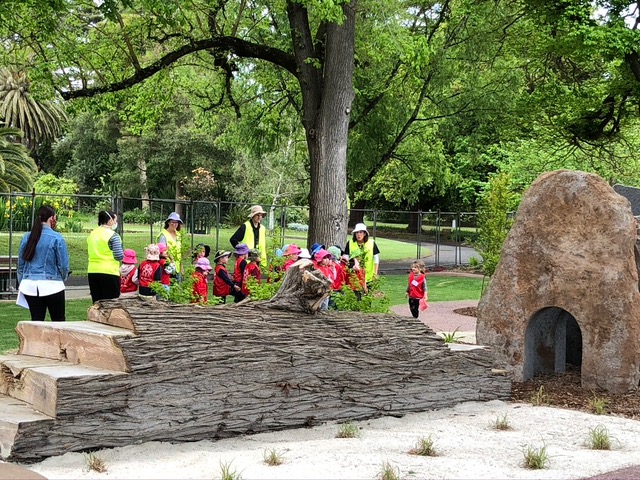 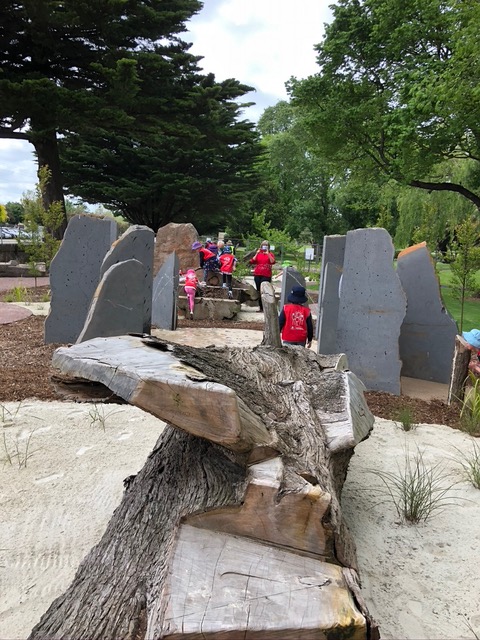 The Friends would like to take this opportunity to thank all who took the time to write letters of support to get this project over the line. We are now in full swing and should have the play space completed by the end of the year

On March 26th. The Friends of WBG were relieved to learn that their popular Pick my Project proposal had been given the green light by Heritage Victoria. There are conditions imposed, but we can work with them. Gaining approval has been a long drawn out, frustrating, exhausting and expensive process. We are most appreciative of the work of John Sheely Curator and Paula Gardiner WCC for their diligence and perseverance in the quest to deliver this exciting project.

Initially the proposal gained 347 votes through PMP. Nevertheless Heritage Victoria formed the view that a nature play space did not fit within Guilfoyle’s 150 year old plans and that it should be advertised to allow public comment. They received an unprecedented 154 letters of support and not one objection.

This outstanding show of support from individuals, clubs and organisations has been confirmation of the value placed on our Gardens and provides encouragement for the implementation of this exciting development.

It’s worth while noting that the director of Heritage Victoria on a visit to the gardens paid tribute to the remarkable work done by the curator and his team in maintaining or outstanding Guilfoyle gardens.

The new nature based play space in the Warrnambool Botanic Gardens has been designed to engage children with plants and the heritage botanic gardens. The new space draws on a number of themes, the primary one being the site's location in a William Guilfoyle designed heritage botanic garden. New clambering logs and rock shards are a modern interpretation of the grotesque Victorian follies favoured by Guilfoyle, and the dramatic foliage plants draw on the site's gardenesque design themes.

Central to the design of the play space are three large logs, carefully arranged and carved to become balancing and clambering elements and gentle focal points. These were salvaged from large Monterey Cypress trees lost from the gardens, following industry best practice in the thoughtful salvage and repurposing of timber from heritage trees. These logs, and a large stump on site inspired the design, which is softened at each end to include a maze of clambering stumps and a ground level "canopy" of crossing logs interplanted with dramatic foliage plants. This canopy is reminiscent of the branches of a tree and provides opportunities for balancing, clambering and making cubbies.

Intersecting the log spine are a series of basalt shards, from the local stone which is such an essential part of Warrnambool's character. These shards will form gentle play elements and Victorian style focal points and have been designed as careful foils to show off the surrounding plants. This will create a similar effect to the shards in the Ian Potter Foundation Children's Garden in the Royal Botanic Gardens Melbourne, while the log canopy is similar to that in Kyneton Botanic Gardens. The centre of the shards includes a small water play element, promoting creative and sensory play.

Integral to the design of the space is how the edges are carefully integrated into the heritage gardens. The original plan for Warrnambool Botanic Gardens by William Guilfoyle has been lost, but examination of his plans for other sites allow a good estimation to be made of what it would have included. The new play space is designed to ensure that design features typical of Guilfoyle’s style are respected, especially dramatic foliage, screening planting around the entrance, and a thoughtful direction of views to the lake. Lawn mounds flowing into and along the play space further tie it into the wider landscape and respond to the picturesque flow of the site.

Planting for the site will be carefully chosen to reflect the site's history and future use, with all plants being able to withstand the rigours of playing children whilst also providing the bold foliage and colour typical of a Victorian era botanic garden.  Proposals for planting include small copses of feature trees such as tree aloes and turpentine. 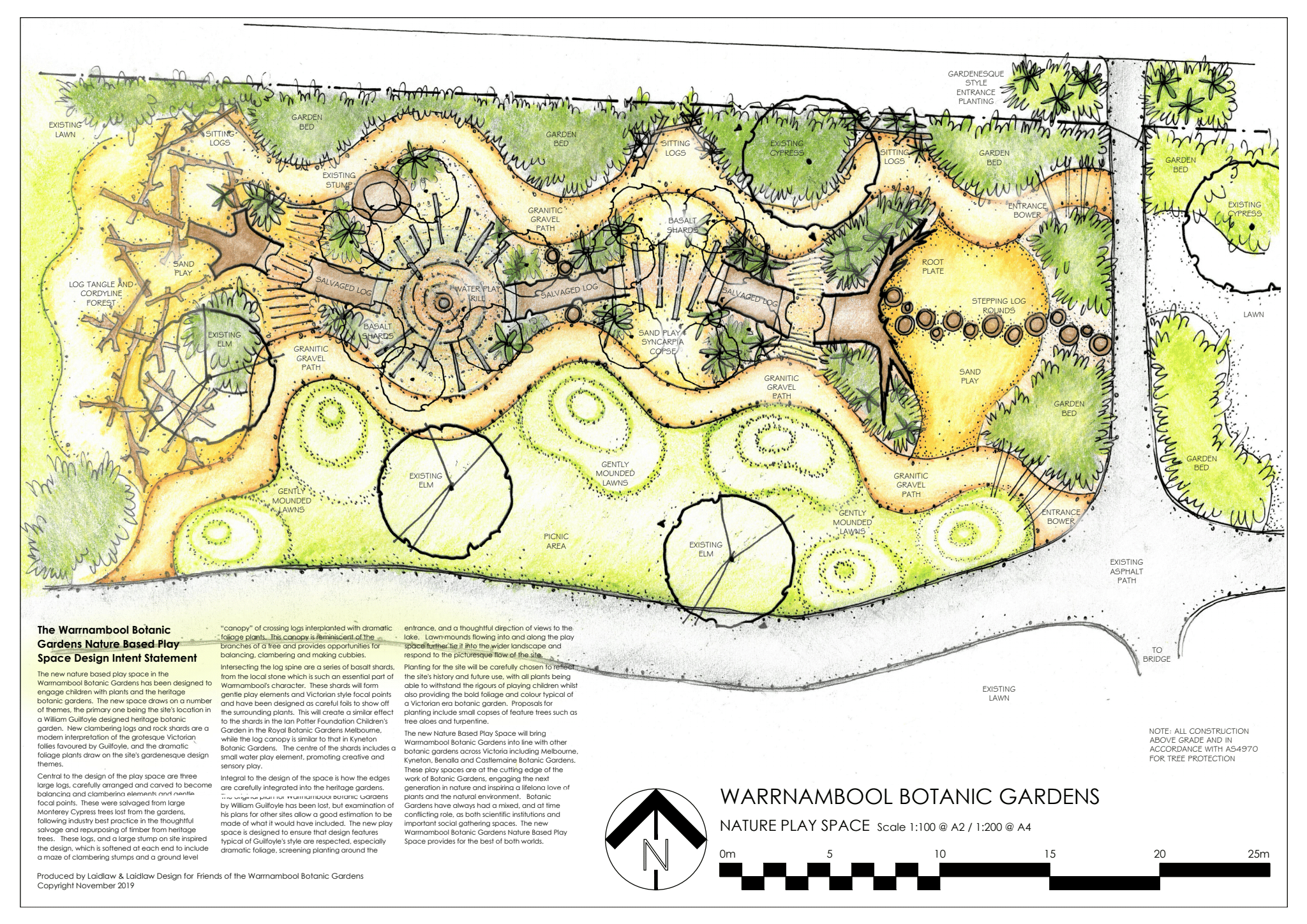 Design Intent Statement PDF visit the website of Laidlaw&Laidlaw to view some of their award winning projects.

Parents and children enjoying the area designated for the garden space

Congratulations! We are very pleased to confirm that the project idea in which you are a partner organisation, Nature based play space at Warrnambool Botanic Gardens, has been successful and will now progress to the funding stage of Pick My Project.

Over 285,000 votes were cast by over 95,000 Victorians. The project idea in which you are a partner organisation is one of 237 successful projects from across the state to share in $30.2 million of community grant funding.

The Friends and WCC are well underway to creating this space with the help of the funding received to date.

Details for the project

A unique and creative play space will be established for all ages using natural and recycled materials which sit comfortably in the heritage listed gardens. A large cypress stump and the remains of a historic tree will be incorporated into the design, becoming play pieces. Elements which encourage climbing, jumping, balancing and squeezing will be included, such as logs, rocks, ropes and old bridge timbers. These elements will encourage both active and creative play, providing spaces for adventure, escape and connection to nature. Careful selection of appropriate plantings will further connect children to nature.

The WBGs are valued by children and families, with high visitation throughout the year for a range of unique play opportunities including the iconic Moreton Bay Fig tree roots (pictured), feeding the ducks and climbing on the cannon. Community members have expressed interest in more opportunities for creative and active play in the WBG with a recommendation to 'design and develop sensory and nature play areas' listed in the WBG Master Plan (2017). The heritage listed WBG is situated in a residential area adjacent to two large primary and a secondary school, which will have opportunities to contribute to design.

The steering committee, WCC and garden architects Laidlaw&Laidlaw held a listening post a the Gardens WUNTA and Jazz in the Gardens festival. This enabled the public to have a say in the outcome of the garden space.

For further details about this day the Warrnambool Standard very kindly allowed us to link here their in depth article on the day. 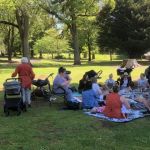 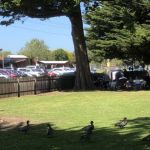 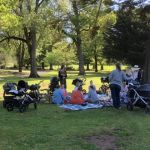 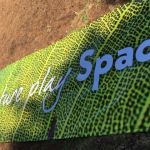 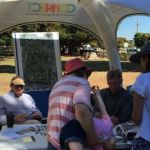 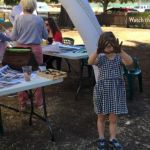 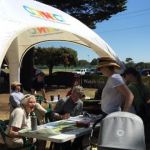 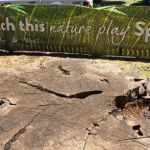 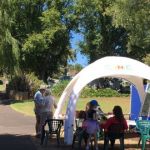