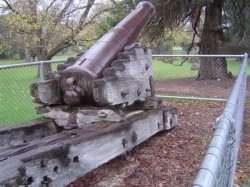 The CMP describes the cannon in Warrnambool Botanic Gardens as follows:

The gun was cast at the Carron Ironworks at Sterling, Scotland in 1813. The date 1837 on the barrel probably indicates it was bored out to convert it from a 24Pr to a 32 Pr in that year. It may have originally been a naval gun and the conversion undertaken when it was brought ashore. It is very probably one of the 15 guns that are known to have constituted the defences of Victoria in 1860. It was possibly sited at Cannon Hill before the defences moved to Flagstaff Hill. ( p.29)

Whatever its precise history there is no doubt that this gun and the other cannon in the group of fourteen nineteenth century guns are rare, the carriages are extremely rare and guns on their original carriages are exceptionally rare in a worldwide context.

The CMP details the condition of each of the guns and makes recommendations for their preservation. The Botanic Gardens Gun is dealt with in detail.

The cannon [in the Gardens] is in generally good condition although the underside of the barrel shows some staining and slight (8.6.2)

The CMP recommends that in the short term weeds should be poisoned, the cannon should be treated with rust resistant oil and 'if possible moved away from the adjacent pine tree'. (note that the tree referred to is senescent and marked for removal) In the short term an experienced shipwright or carpenter, under the supervision of a conservator should construct a reproduction artillery piece carriage to replace the current badly deteriorated carriage Timber such as jarrah or blackbutt could be used if Burmese teak not available. (p. 122, 128)

The present carriage is recognised as 'an excellent and rare... example of its type' and in very good condition (?). It should be treated with preservatives and stored in a dry, well ventilated area. (p. 122)

The report concludes with useful information on possible heritage grants and a comprehensive bibliography.